Jaeger-LeCoultre Hybris Artistica Collection: For Art’s Sake. Fans of Jaeger-LeCoultre may have already gotten a glimpse of the Hybris Mechanica series. In 2014, the company introduced a series of Hybris Artistica which is a collection of highly crafted artistic watches that showcase impressive skills like enameling, marquetry, engraving and gem-setting. 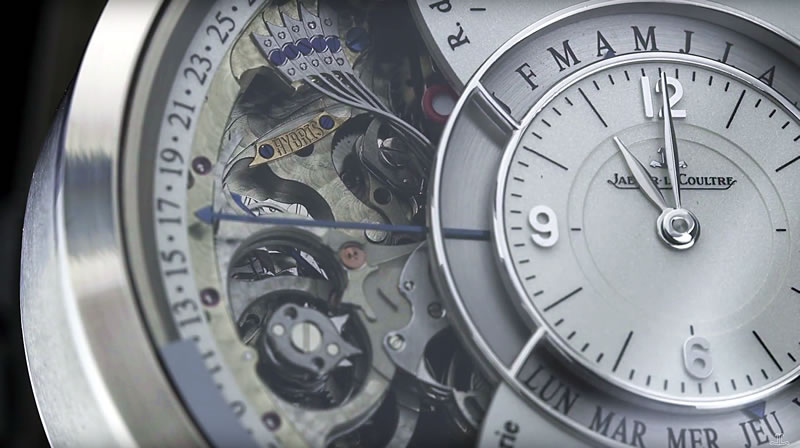 According to the international marketing director of Jaeger-LeCoultre, Stephane Belmont, the company understands the importance of aesthetics and that it’s just as important as technical mastery and this is the reason why they created every single watch in the collection that have something that highlights it. 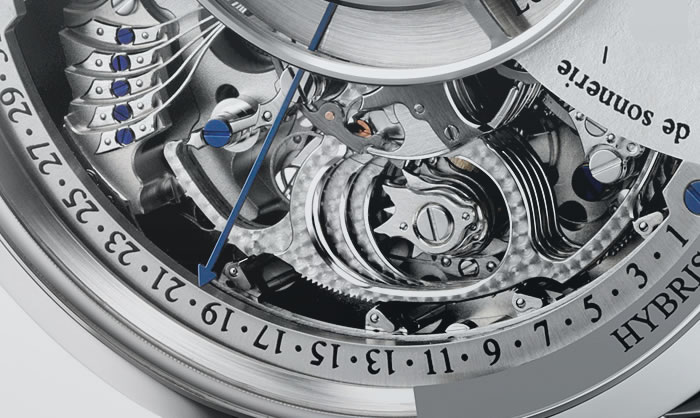 There are 12 watches in the Hybris Artistica and almost all of them are highly complicated using the same movements in the Hybris Mechanica. Some of these watches are one of a kind while others are made in a series of 3.

This version of the Master Grande Tradition Gyrotourbillon 3 is designed to be avant garde and bold. So the designers picked an unorthodox material for the case, tantalum. This meta is anthracite colored and it is very resistant to corrosion and scratches. Tantalum is thick so it’s difficult to work with. It has a bluish gleam and creates quite an impression. The dial for the minutes and hours is black to accentuate it and the chronograph seconds is light gray while there are white numerals on the digital minutes counter set on a dark background.

The movement has a blue balance wheel in 14K gold and the movement itself is treated with ruthenium. It has over a hundred parts and the tourbillon turns on 2 axes weighing less than a gram.

The Master Grande Tradition Tourbillon Celeste showcases a revolving flying tourbillon that has a sidereal time which is 4 minutes shorter than solar time. Aventurine is the material for the dial and it has the same shade as the night sky, deep blue. The dial’s area which represents the months has a guilloche pattern and it has a luminous polish to sort of evoke the depth of the cosmos.

There’s no bezel because it would have affected the visibility of the hour ring. The domed crystal is set directly on the band of the case so you get a clear view of the rotating tourbillon.

The Master Gyrotourbillon is the most remarkable piece in the Hybris Artistica collection and it is reminiscent of stained glass windows. The dial is made from skeletonized aventurine plate and you’ll see carved rosettes with hour markers in blue polish.

It takes a lot of time and patience to create the dial because it is obtained from a very hard and brittle mineral that can easily break with the slightest impact. The domed sapphire crystal is thick and is attached onto the case directly. There’s no bezel to block the view.

The dial’s upper part shows the time while there’s a half circle date display below. On the back, there’s a sapphire crystal to let you view the retrograde leap year display. You can clearly see the tourbillon because the sapphire crystal tab extends to the case at 6 o’clock.

This watch was first introduced in 2009 and the Duometre a Grande Sonnerie hits the hours with a complete Westminster carillon which can sound the longest rendition of the Big Ben melody on a watch according to Jaeger-LeCoultre. Aside from this feature, the watch makers also added a couple more complications – a perpetual calendar and a flying tourbillon.

For the Hybris Artistic version, the watch maker picked a clear rock crystal for the whole dial while the original model hides much of the mechanism underneath an opaque dial.

The Duometre Spherotourbillon shows a 3-dimensional rotation of the tourbillon. It not only rotates around the axis on the cage made of titanium but it also orbits around a second axis thus defying the effects of gravity.

The Duometre Spherotourbillon version in the Hybris Artistica has a dial with a blue paillone enamel. The small specks of silver appears like stardust and distributing it takes a lot of effort and skill. Once the enamel is fired in the furnace, the artisan polishes it to show the metal elements on the dial. But he needs to avoid scratching the metal.

There’s an enamel border on the bezel as well as on the side of the case with engraving that is motivated by the Venice’s Doge Palace. There’s a window on the side so you can view the tourbillon and 3 enameled gold steps on the tourbillon sides.

Inspired by a pocketwatch from 1928 which was made of gold and enamel, the Duometre Spherotourbillon Pocketwatch has a tourbillon that appears to be suspended in air because of the clear sapphire tourbillon bridge. There are 3 white enamel dials and hand-chiselled dial that have similar designs to the original watch. It has blue enamel on the edges of the dial and bow. The enamel is delicately polished to bare the bezel’s gold lines.

The Hybris Artistica version of the Grande Reverso Tourbillon Squelette was very challenging for the designers. There are so many heavily decorated Reversos in the previous years so they had to think long and hard to come up with one that will truly stand out.

Jaeger-LeCoultre decided to skeletonize it. When you look at it from either side, you’ll see that it is fully open-worked with the hand-decorated components viewable behind two clear crystals (sapphire). The movement is housed in a metal frame.

The women’s Reverso have had many jewellery interpretations through the years and the Reverso Cordonnet Neva has stuck with this tradition. However, now with the Hybris Artistica, they went a notch higher. The watch harks back the a 1930s model that was held by a leather cord on the wrist. But this time instead of leather the cord isgold set with diamonds. The technique they used is snow-setting and the diamond setter had to put hundreds of diamonds of various sizes side by side to cover the gold surface. This pattern makes you think of the Neva River in winter when the water turns to ice. The shimmering bands flow onto the dial and wrap around the watch’s curves. Each watch has 2,175 diamonds and weighs 9.25 carats.

Women collectors of Jaeger-LeCoultre watches will certainly not be let down with the creation of the Rendez-Vous Celestial, a high complication watch which has an astronomical star-chart. The arc of the hour hand is covered in baguette diamonds which was done using the rock-setting tecnique so you won’t see any visible metal in between them. This arc is on top of a lapis-lazuli sky chart which has 12 hand painted signs of the zodiac. Every 23 hours, 56 minutes and 3 seconds the sky chart will rotate. There’s also another crown set with a diamond and you can use it to move the dial’s shooting star to mark your next rendezvous. There are a total of 941 diamonds on the dial, bracelet and case and weigh 11 carats.

This watch has close to 16 carats of diamonds. But apart from that, it also has a tourbillon with a transparent sapphire bridge. Some of the diamonds are baguette cut while others are set by means of the rock setting technique so you won’t see any metal between them. This version’s bracelet has been redesigned so the lugs fit nicely to the bracelet.

The amazing thing about the Atmos Marquetry clock is that it gets its energy from atmospheric temperature changes and so it can work without human intervention for as long as 15 years. It lives on nothing ubt air and a tiny change of 1C will give it a power reserve for 2 full days (48 hours).

This version is housed in a crystal enclosure and each side has a marquetry door that bears the enameled reproduction of the Spring and Autumn painting created by Alphonse Mucha, a Czech Art Nouveau artist. The doors are made of horse chestnut and Indian rosewood. The glass back of the clock shows the same two paintings. The minutes and hours are shown on individual enamel dials and the moon phase is created from rosewood and is decorated with a star studded diamond pattern.