Montblanc’s millisecond challenge was solved by a child’s toy.

If 3 watches represent a trend, then that can only mean measuring milliseconds is also a trend. Two well known watch brands have unveiled mechanical chronographs that have been claimed to be capable of measuring 1/1000 of a second. TAG Heuer first revealed its Mikrotimer Flying 1000 Concept Chronograph and it was succeeded by the Mikrogirder which is much faster than its predecessor.

At SIHH, Montblanc decided to unveil its own timepiece that could measure time millisecond and it's called the TimeWriter II Chronographe BiFrequence 1000, which uses a unique method of splitting milliseconds.

But this feat did not happen in just a short time. In fact, we can say the development of the high speed Chronographe of Montblanc started in 1916 when Minerva launched its very first 1/1000s of a second stopwatch. When Minerva was acquired in 2006 by Richemont, it became a true manufacture and it specialized in the creation of pilot's watches and chronograph. 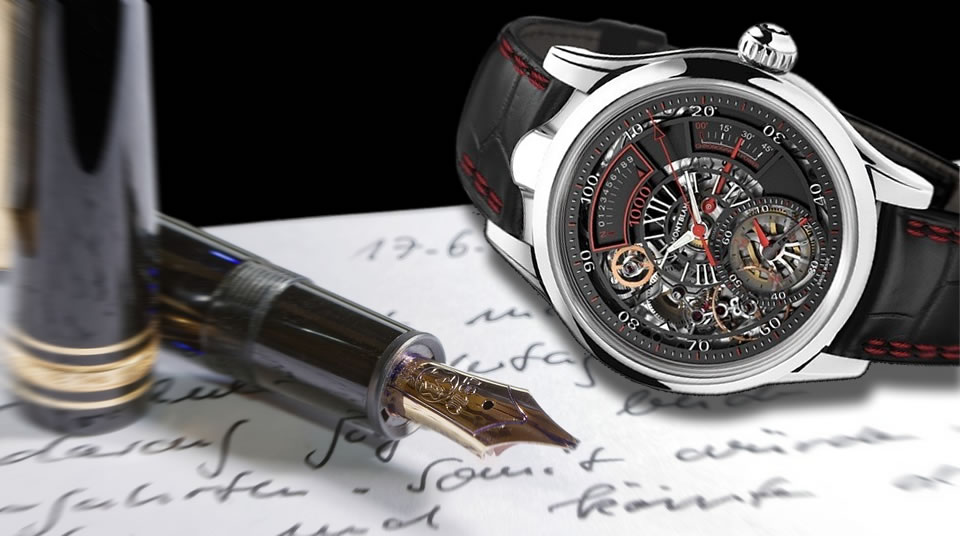 A year later in 2007 Richemont made the decision that Minerva will create movements for Mont-blanc and a year later Mont-blanc created the Fondation Minerva which was instrumental for the development of the TimeWriter series. This collection is comprised of beautiful timepieces made with independent watchmakers. The very first one was the Metamorphosis which was unveiled in 2010. Currently the newest one is the Bi-Frequence 1000.

Because of Minerva's extensive experience in making high speed chronograph watches, Montblanc was able to realize that making a chronograph that could measure 1/1000 of a second presented some challenges:

First of all, the movement needed to be extremely precise. Simply increasing the balance wheel frequency would not be enough because when it engages the chronograph, it would cause a big loss of amplitude thereby reducing its accuracy.

Secondly, the gear train that advanced to a speed of 1000 times per second would eventually reduce the longevity of the movement when it becomes subjected to wear and tear.

Next, the chronograph indications need to be readable and measuring to the closest 1/1000s won't mean anything if the elapsed time to the millisecond cannot be read easily.

Lastly, the chronograph needs to be useable in the real world which means it has to measure intervals much longer than a couple of minutes.

To be able to meet these challenges, Montblanc worked with Bartomeu Gomila, and independent watchmaker who had an idea for measuring milliseconds. The concept was based on a simple children's toy, a hoop that kept rolling with regular taps using a stick. The outcome is a chronograph that has a unique method for splitting seconds into much smaller units and a rather unique way of displaying the numbers.

If we were to talk about the Bi-Frequence, it's imperative that we start with an overview of the layout of the dial. Initially, you might notice that Montblanc failed to satisfy the legibility requirement. Managing director of the firm, Alexander Schmiedt, said that it's not an easy watch at all. But as we figured out a brief orientation yields awareness of the clarity of the dial. By looking at a close up image of the watch, you'll see that the time is displayed by the small white hour and minute hands at the center. The watch is a monopusher design with the functions like reset, start and stop found between the 12 o'clock lugs. The location of the pusher is a nod to the Minerva 1/100s of a second stop watches from the past.

Meanwhile, the elapsed seconds of the chronograph as well as the minutes are showcased co-axially at the 6 o'clock mark. The red tipped hand showcases the 60 seconds elapsed time on the outer track in white and the shorter red hand tells you the elapsed minutes on the inner track in red.

When running, the chronograph will show a motionless small red indicator with a triangular shape at the bottom and it will point to the N. When the chronograph is stopped, the red arrow will immediately jump to show the 1/1000 of a second that has elapsed.

The chronograph has its own spring barrel, and you'll see the power reserve on the 3 o'clock dial. The bi directional winding crown turns one way and winds the timekeeping mainspring. The autonomy of the chronograph is 45 minutes when it is fully charged and you can boost the reserve by winding the crown during the time that the chronograph is running.

According to Montblanc, the chronograph's excellent power reserve ensures the balance wheel's amplitude, which boosts the precision of its timekeeping. Another noteworthy feature is the regulator of the chronograph escapement. This one is visible in the image of the movement when you look at the caseback.

Now that you already understand the dial, we can proceed to look at what's behind it. Or at least talk about what we do know about this element because Montblanc has not yet completely revealed the technical specifications.

Similar to TAG's Mikrotimer, the Bi-Frequence from Montblanc uses 2 separate mainsprings. The first one is used to keep the time of day and the other one is being utilized for the chronograph.

The balance wheel for timekeeping oscillates at a speed of 18000 vph or 2.5 hz. Meanwhile the balance of the chronograph oscillates at 360,000 vph or 50 hz. If you are particular of these aspects you might be thinking how a chronograph with a speed of 50 Hz can measure milliseconds. It's too slow right? That's where the childhood hoop concept of Gomila comes in.

Normally there's a direct relationship between the frequency of the escapement of the chronograph with the fractions of a second that it can measure. Case in point – the well known Zenith El Primero movement beats at 36,000 vph or 5 Hz and it can measure 1/10s of a second. This is due to the 10 vibrations of the balance wheel. You then need to multiply this by 60s in a minute then once more by 60 minutes for the watch.

Montblanc has yet to reveal the exact nature of the interaction between the thousandths wheel and the gear train of the chronograph, as well as the 1/1000s of a second indicator. We can only assume that this may be due to the 2 primary and 24 subsidiary patents that are still pending that in turn means lower frequency into timekeeping resolution requiring higher frequency normally. It has been noted by Schmeidt that the translation principles of Montblanc will function with other frequencies.

The prototype watch which we have scrutinized started, stopped and reset seamlessly and the 1/1000s of a second display worked just as we had hoped. Montblanc has mentioned that it has tested the timepiece using a tool called stroboscope to ascertain that it is really measuring the millisecond accurately.

Schmeidt said the movement is completely integrated and that it is in the original design. They did not utilize any existing modules or plates in its construction. The functions of the chronograph are controlled by a 2-level wheel. The first level directs the stop, start and zero return functions while the second one guides the 1/1000s. The thousandths wheel doesn't engage with the chronograph gear train in the conventional way which means it won't hasten the movement's wear and tear. Montblanc deems this movement to be the very first of its kind in the world, not for being able to measure 1/1000s but rather for the way it measures the 1/1000s.

The chronograph is no doubt fast however its reset function isn't. It works in slow motion to allow the user to appreciate the watch's complexity in a subtle way.

Schmeidt explains that the development of the movement took 2.5 years and was made possible by a team that worked at Villeret. Gomila himself worked with the team for 10 months to create the prototype.  The creators made the parts and Gomila assembled all the parts personally.

The Bi-Frequence according to Schmeidt meets all 4 challenges and it can measure accurately 1/1000s of a second. It does not suffer any issues with wear and tear, it's very legible and the power reserve makes it very useable.

There will be 36 pieces that will be produced priced at $305,900. The first piece was delivered by the end of 2012, and 1 or two pieces has been created every month thereafter. Most of these pieces have been pre-ordered and the estimated completion is set at 2 years.